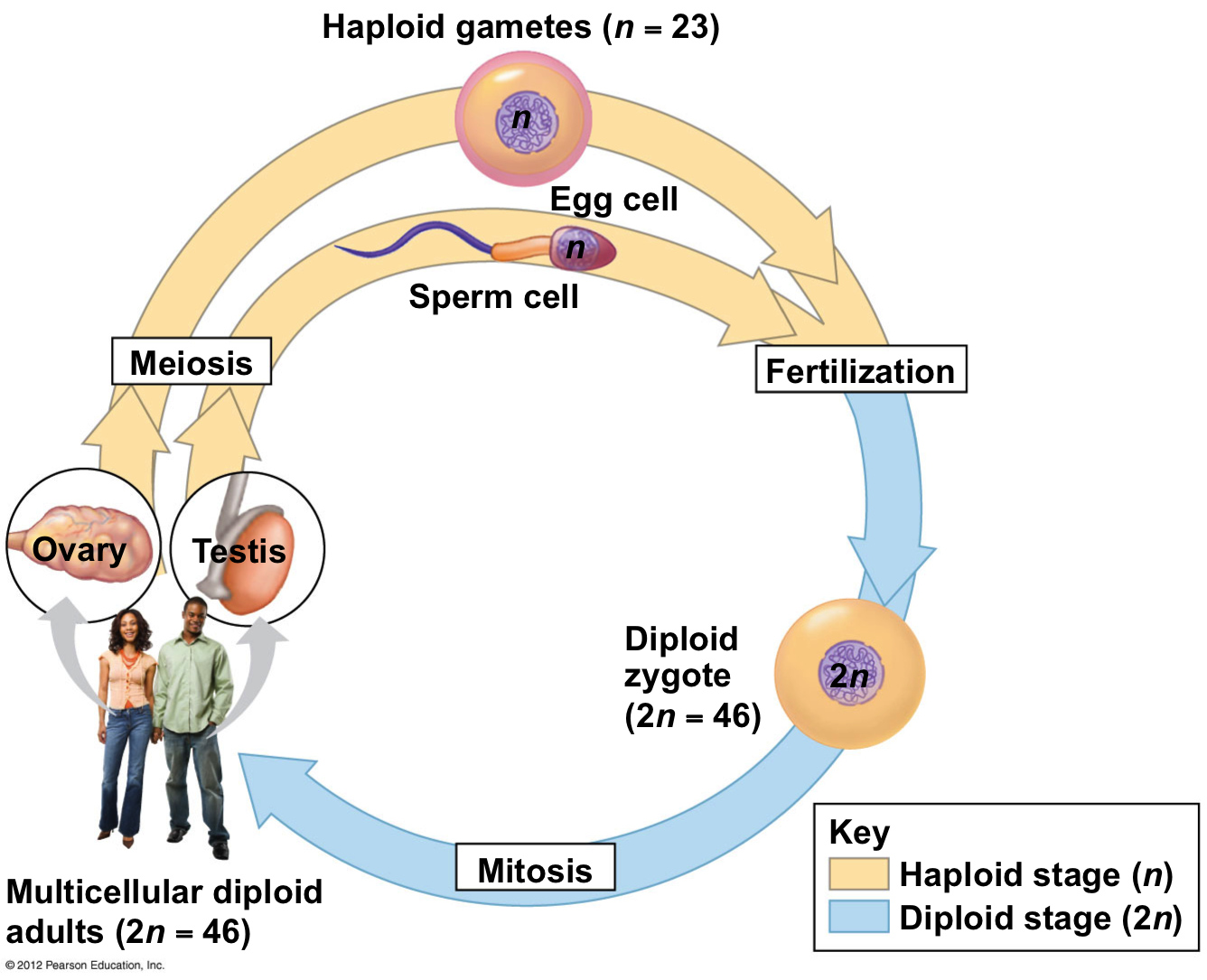 “…the unborn child, being 2N, is, biologically speaking, a human being all along.”

From a biological perspective, the human life cycle is essentially the same as the life cycle of all the other organisms that reproduce sexually (See the diagram, at the upper right). Without uniting in the mother, the egg and sperm have no human life at all and do not develop into anything; they remain just an egg and a sperm and soon die. The 2N phase of the human life cycle, which includes all of the developmental stages of human life from conception (fertilization) to fully formed babies in the womb to newborn babies to adolescents to teens to adults, actually begins with conception in the mother (See the diagram). At the moment the sperm enters the egg a new, never before existing and never to be repeated, totally unique, human life begins. All of the necessary DNA is present and all that is needed from that moment until birth is time, nutrition and a safe environment suitable for growth (a healthy womb). These are the basic, biological facts of human reproduction. So, from a biological perspective, human life (the diploid, 2N phase) begins at conception (fertilization) and proceeds on an uninterrupted continuum of developmental stages, first in the mother, and then outside of the mother. There is no identifiable point in this continuum at which an unborn child becomes suddenly human; the unborn child, being diploid, or 2N, is, biologically speaking, a human being all along. And that is why, in 1960, everyone seemed to know that human life begins at conception.

Fast forward, now, to 1973, when the U.S. Supreme Court made abortion legal in the entire country. The Court did not rule on specifically when human life begins, so it was left to others to decide this detail for themselves. These decisions were based on the false premise that there is a moment when a developing child changes suddenly from non-human to human. This premise is a fantasy that has no basis whatsoever in the science of biology. Rather, it is a figment of the human imagination, a transparent attempt to rationalize and justify the termination (i.e., murder, by definition) of helpless, innocent human life in the womb by declaring the existence of an arbitrary “transition” point in what is, in reality, a developmental continuum. Isn’t it ironic that, in America, we permit murder only if the victim is a helpless, innocent child in his/her mother’s womb, an environment that should be the safest place in the world for them?!

Ultrasound images or videos — especially the new 3-D versions, see above – of a developing child in his/her mother’s womb provide conclusive and convincing evidence that the unborn child is, indeed, a human being in the early stages of development. In fact, such images are so convincing that when women considering an abortion see their unborn child in their womb via ultrasound imaging, 88% of them change their minds and decide against abortion (click HERE). They KNOW that they are carrying a fully human being! To view an ultrasound video of an unborn child, click HERE.

An Appeal for the Rights of the Unborn

If you want to make me cry, then remind me of the accidental traffic death of my daughter, Liesel, when she was only 20 years old. Or, remind me of the accidental drowning deaths of twin toddlers in Knoxville a few days ago. But, if you really want me to weep and mourn deeply, then remind me of the intentional deaths of tens of millions of innocent, helpless, unborn babies, murdered in their mother’s womb, in America since Roe v. Wade. The United States will have no claim whatsoever to any moral high ground concerning anything, unless and until we, as a nation, rise up against this, the most despicable of man’s inhumanity to man, and legally declare it to be what it is: murder of the worst kind. And that’s why we need more and more pro-life justices, judges, governors, legislators, presidents and God-fearing voters to lead the charge against abortion. America, bless God and stand against this unthinkable, but very real, national tragedy!

The premise that there is a moment when a developing child changes suddenly from non-human to human is a fantasy that has no basis whatsoever in the science of biology. Rather, it is a figment of the human imagination, a transparent attempt to rationalize and justify the termination (i.e., murder, by definition) of helpless, innocent human life in the womb by declaring the existence of an arbitrary “transition” point in what is, in reality, a developmental continuum. When will America, once again, value common sense and basic morality?

(For more of my articles on ABORTION, click HERE)

8 thoughts on “Abortion: A Biological Perspective”