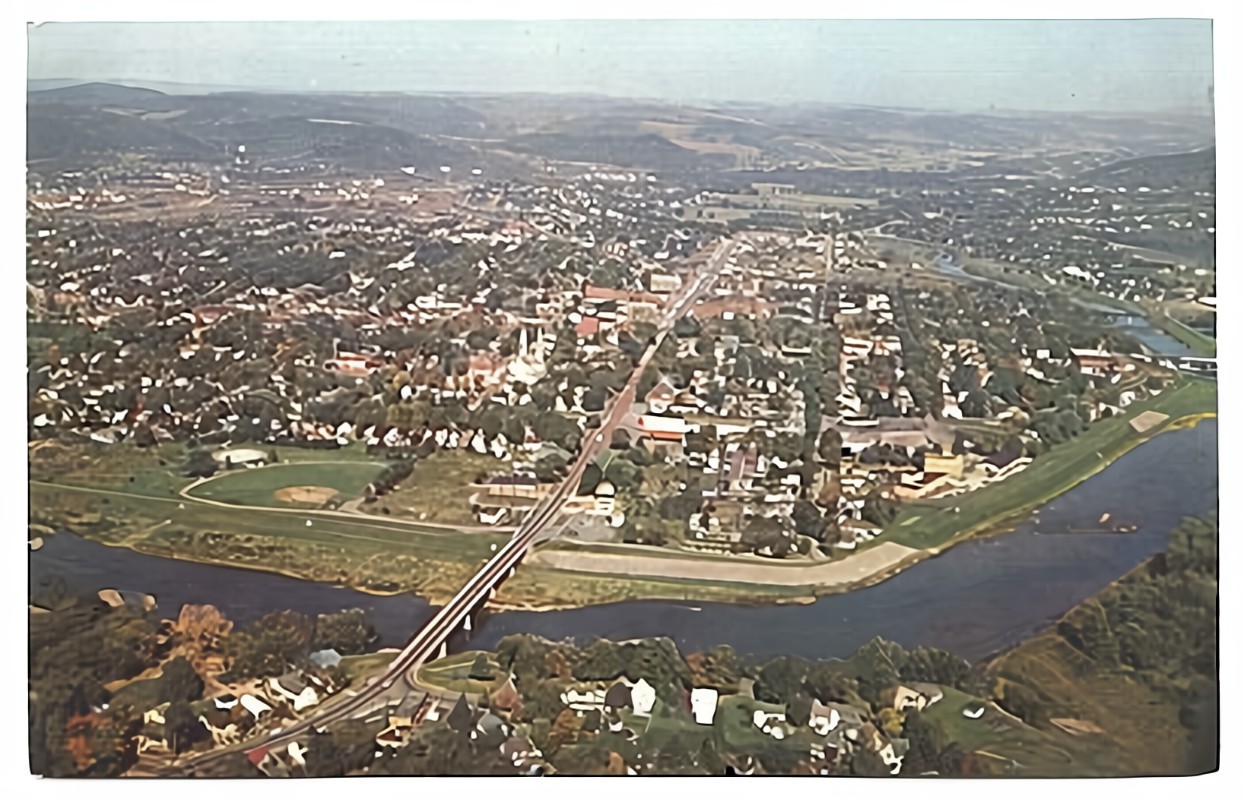 Where they lived, just within the city limits of Olean, New York, all they had to do was cross the road, walk through Ward’s meadow, trudge across Rusnick’s apple orchard, and “presto”, they were in the woods. The children would often go this way to pick Violets, Trilliums and May Apples in the Spring. Later in the growing season, they often stopped to pick a handful of Choke Cherries. A few would do, because the mouth puckered and felt shrunken from the slightly toxic taste.

They climbed the first hill, which brought them to the stone quarry. It was time now to sit down and throw pebbles to the bottom of the rocks. They made a pleasant echoing sound in the stillness of the woods as they careened from rock to rock on their way down. After a momentary rest, the children continued up the tower line.

This way lead on up, higher and higher. At this point, they stayed alert. Bears were seen here a time or two. Reaching the top provided a wonderful vantage point for observation. From there, they could view much of Olean. They picked out streets and buildings in the city, studying and surveying the whole scene all at once. They were always amazed at the vastness of this view, from the north hill all the way around to the southern boundary of the city.

The children explored the area, wandering to the East and to the West, stopping to make a dam in the pure, running brook. It trickled slowly over stones, making a wide channel to walk across and cool their bare feet. They found crabs (crawdads) under rocks and frogs waiting to catch insects. There were also many other interesting things in the woods: ferns that grew knee high, fragrant honeysuckle bushes, and mosses that looked like green velvet. Vines twisted around tall trees, high out of sight, and many hemlock evergreens held tiny, baby cones that were being rocked to-and-fro on the branches by a gentle breeze.

Going to the other side of the hill, they found the remains of a dwelling: just the shallow cellar with part of the wall intact. Later they learned it was a home that had burned down about a hundred years before. Also visible nearby were some rotting fence posts and a dilapidated gate, which probably kept a horse or cow enclosed.

Walking down to a point near the bottom of the hill, they found an overgrown path and a water hole with water still trickling in from a spring higher up. Continuing down the facsimile of a path, they saw flying squirrels leaping from tree to tree and chattering noisily, warning others about the intruders.

On towards the road, they encountered an elderly gentleman working in a large garden. He was dressed in blue overalls and a straw hat, and pushed a cultivator. He stopped and mopped his brow. “Hello,” he called. “Hello, Mr. Curtiss” replied the children. They recognized the man; he often walked along the road to the garden. They visited for a few moments, and then walked to the road towards home.

This way proved to be a lot longer than the shortcut they had taken earlier. Along the way, the children noticed a herd of Holsteins in Malone’s pasture and the large, unpainted barn that housed them, plus a couple of dogs that gave them a friendly greeting.

Passing a few more country homes, they reached their own road. As they caught sight of their house, they could almost smell the cabbage rolls that were cooking on Mom’s stove. Home at last, after a long afternoon. With a surge of fresh energy, the youngest child bolted through the door, yelling, “Last one in is a rotten egg!”

2 thoughts on “Joys without Toys”