“Some people live and learn; others just live.” – Gene

In an earlier story (click HERE), I introduced a childhood activity that we called “fightin’ waspers.” Growing up in the early-to-mid 1950s in Cypress Valley, Arkansas – one of the more rural areas of the state – did not afford much opportunity for the more standard kinds of leisure recreation, to put it conservatively. We lived on a dirt road off of a dirt road, and our friends were few and far between, literally. Consequently, we were often left to dream up novel activities to entertain ourselves, using whatever meager resources were at hand. This particular “adventure” took place when I was about 8-10 years old.

One of the most exotic and creative “games” we came up with to counter the boredom was what we called “fightin’ waspers.” Now, we were already into sneaking up on large “hummingbird” moths feeding on flowering shrubs and smacking them down with home-made ping pong paddles, or “snapping” them with home-made, woven “whips” constructed from cotton string. But we didn’t dare mix it up with our local wasp population, because we didn’t know how to make such an endeavor end well for us.

Not to worry, though; help was on the way. Through the intervention of a family friend, a Mr. Johnson, we learned that wasps cannot sting you while you are holding your breath. Well, it didn’t take long for us to put this new information to good use. But, how could we come up with a plan to, finally, take on the waspers and emerge victorious? After our twisted little minds had mulled it over for a while, we came up with the following rules of engagement: 1) decide beforehand whether we would either a) all stand still and let the waspers fly past without trying to sting us; or, b) strike them down with hand weapons fashioned from small persimmon bushes and try to actually kill as many as we could when they attacked; 2) walk along the dirt/gravel road looking for suitable wasp nests in the bushes lining the ditch, and then throw stones at them until we hit the nest, causing the wasps to “explode” off the nest looking for an enemy to attack; 3) always hold our breath, just in case we were attacked, despite all of our precautions; and 4) everyone will do the exact same thing (freeze or fight) each time we engaged the “enemy.”

After numerous successes, “fightin’ waspers” became established as a permanent part of our repertoire for dispelling boredom in Cypress Valley. Many a time, Johnny and I would summon Herman Lee, Fred Ray and/or Danny Lee to come over and play “fightin’ waspers” with us. And, as God is my witness, I can recall only two or three times anyone got stung, and that was only because they happened to take a fresh breath at just the wrong moment during the fight. Amateurs!

But this, admittedly risky, game took a turn for the worse one fateful Sunday morning. Tommy Joe, Herman Lee, Fred Ray and Danny Lee had joined Johnny and me at our house to “chill” until it was time to walk over to the local church for Sunday School. Now, Tommy Joe had heard about “fightin’ waspers”, but he had never actually participated in any of our wasper fights, and he didn’t know the rules. For some reason, while we were waiting in our living room to walk to church, Tommy Joe asked if we could play “fightin’ waspers” right then and there. When I heard him say that, “Satan entered into me”, and I devised a sinister plan to play a practical joke on Tommy Joe. Boys will be boys, you know.

So, I explained to Tommy Joe that we didn’t have time to roam the road-side looking for a suitable wasp nest, but there is a bumblebee hole (nest) – in the road embankment almost directly across the road – that is easy to find. “But”, I explained, “we only fight waspers, because bumblebees are so big, fly so fast and pack such a wallop in their stingers.” I was sure that would end the conversation. Not to be denied, however, Tommy Joe insisted that he wanted to fight the bumblebees anyway. So, thinking that he was really just bluffing, I led Tommy Joe through the front screen door and out into the front yard to show him the bumblebee hole. Without hesitation and to my surprise, Tommy Joe picked up a stone and proceeded to hurl it at the hole. By that time I was running like the wind back toward that screen door and the protection it would afford.

Alas and alack, and as luck would have it, Tommy Joe’s aim was true, and out came the bumblebees, mad as a hornet (so to speak)! Next thing we knew, Tommy Joe was making a bee-line (pun intended) for the screen door too, yelling and screaming and flailing his arms in panic. Once he was inside the house, we quickly gathered around him to see if he was alright. Well, he was not alright, not at all. A bumblebee had “nailed” him right on the tip of his nose, and his face was already beginning to swell up and turn red. The pain must have been intense, as he was crying and holding his hands to his face. This ruckus attracted the attention of my Mama, who rushed into the room to assess the situation. The moment she asked, “What in the world is going on?” I realized that this was not going to end well for either Tommy Joe or me.

With “such a cloud of witnesses surrounding me”, I had no recourse but to tell the truth and face the consequences. The exact sequence of the ensuing events was like a blur to me, but Mama dealt appropriately with me, making several swift and strategically placed contacts with my rear end, before driving Tommy Joe home and apologizing profusely to his Mama for what had transpired and for the now fully inflated, beet-red face of her poor little boy. And, much to my chagrin and regret, that was the first and the last time Tommy Joe was given permission to attend church with us. Go figure!

To this day I feel really bad about this – perhaps somewhat innocent – practical joke I played on my friend, Tommy Joe. If there is a moral to this story, I suppose it would be to carefully think through a practical joke before you set it in motion. Or, perhaps better yet, don’t set it in motion at all, because it could turn out to be a serious and irreversible disaster, as this one did. That said, “Y’all have a ‘fun-filled’ day, now, ya hear?”

(To enjoy more of my short stories, click HERE) 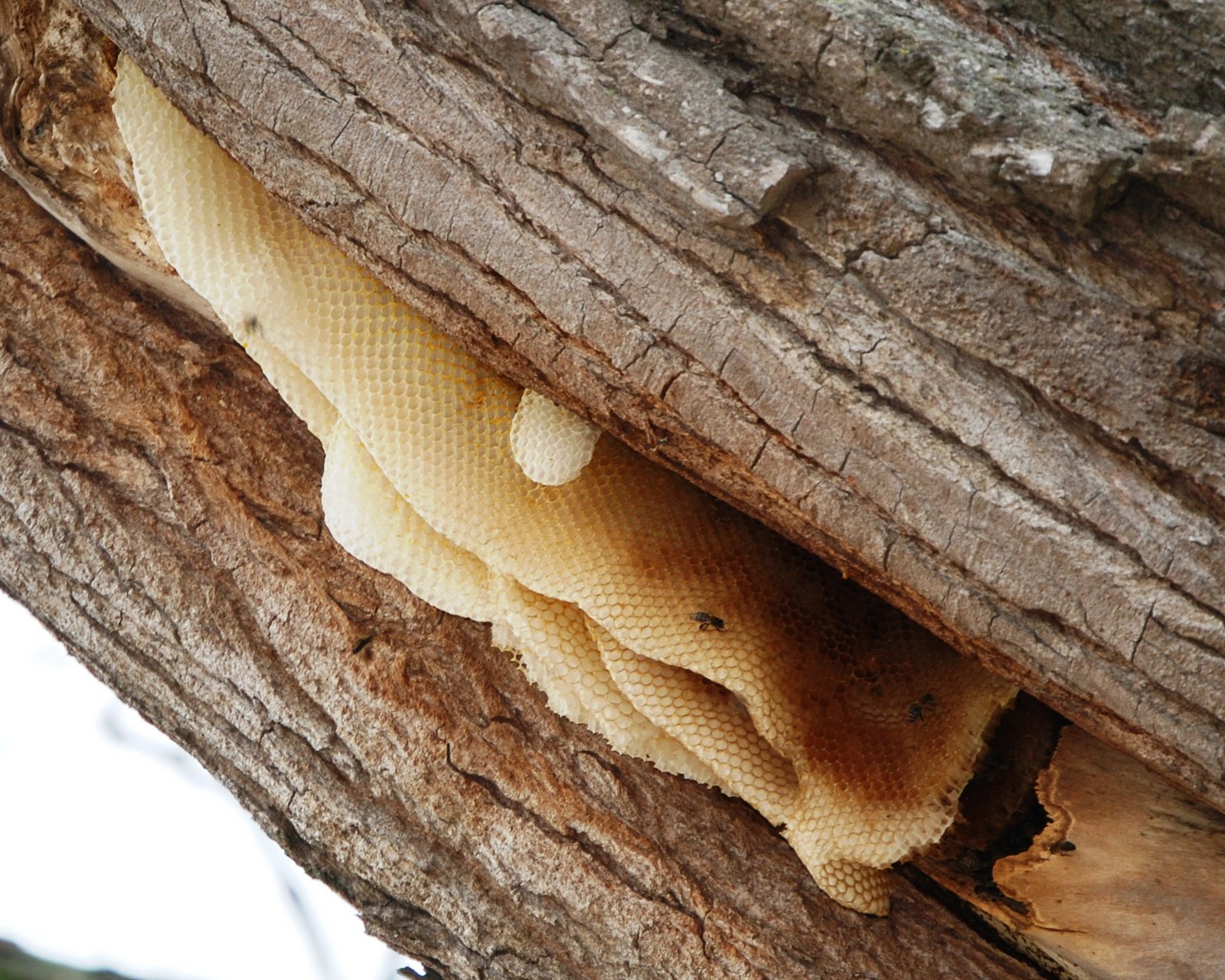 Ken found a bee tree and asked us if we wanted them to cut the tree up for honey.  It’s an old tree, gnarled and lying on its side, so Ken felt justified in cutting it and taking some of the honey.  This opportunity was too inviting to turn down, so we agreed to go along. We were told to wear warm clothing and heavy shoes.  This was November in upstate New York, and the woods are chilly this time of year. Ken’s wife, Doris, had supper ready when we got to our rendezvous, their house.  After supper chores were finished, we began to layer our sweats and jackets on, putting on warm mittens too.

The three men walked ahead of us with a large lantern.  The two 12-year-old boys also carried a lantern, and the three teenage girls and three women trailed behind, grasping a shared lantern.  Watching our footing carefully, we walked through the grazing meadow – about a quarter of a mile – into the dark woods.  How quiet the woods were after dark.  I remember hearing the sound of a small animal scurrying through the leaves now and then.  Once, we were startled by the hoot of an owl.  And the pleasant smell of evergreens, moss, and old logs wafted through the air, completing the sensory experience as we walked along.

Reaching the old bee tree, the men prepared to get the sulfur going to calm the bees.  When the axe split the hard trunk, opening up the hive, we were amazed at the quantity of honey inside it.  This tree must have been home to the bees for many years.  Some of the bees moved around in a stupor, even crawling on the men’s clothing, but they were too lethargic to sting.  The inside of the tree was carpeted with layers of honey comb, a dark color near the wood and a gradually lighter color near the entrance to the hive.  We filled three pails with the combs, enough for each family.  And Ken made sure that there was plenty of honey left for the bees to survive the winter.

While the men worked on the cleanup, the girls began to feel cold, so the women decided we would go back to the house.  It was slow walking.  To make matters worse, the lantern carrier tripped, extinguishing the light.  Since we had no way of re-lighting the lantern, Doris said, “We’d better head for the road.” Almost everything was pitch dark, but looking up at the sky, we could distinguish between the tree line and the dim light of the sky.  That helped us to get our bearings. While we were making our way to the road, one of the bolder ones mentioned something about animals passing in the dark, inspiring us to walk faster. Before long, we had made it safely back to our rendezvous.

Doris made hot chocolate and brought out some cookies to go with it. Before long, we began to warm up.  The men finally came in with the pails of honey.  It is amazing how such small honeybees can amass such a bountiful delight.  (So it is with us, as we work together, how much we can accomplish.)  After our snack, we drove away exhilarated.  A walk in the woods at night can be an eventful and memorable experience, indeed!

After we got back home, I strained the honey and filled several jars to use in making cookies, breads, and desserts.  Wild honey has a unique taste, much different from clover honey, and stronger too.  If you would like to try your hand at making something with wild honey, I recommend the following:

Mix and chill thoroughly.  Form into balls the size of walnuts.  Bake on an ungreased cookie sheet for 10-12 minutes at 350 degrees Fahrenheit.  This makes about 40 cookies.