This episode happened when I was a Junior at Springdale (Arkansas) High School and a member of the Student Council. We were charged with the task of discussing current issues affecting the student body and making recommendations to the school administration on behalf of the students. A new member of the Student Council, let’s call him “Ricky”, was a well-respected, if a bit naïve, Sophomore growing up on a farm located in an outlying area of our Consolidated School District. Now, Ricky typically didn’t say much, but when he did it was straight and to the point, often with an element of country wisdom and flavor.

The year was 1961, the early days of the “mini-skirt.” These articles of female apparel were getting shorter and shorter, prompting some of the parents to press the school administration to come up with a new dress code that would prevent this trend from going too far…up. So, one day the Student Council was discussing just how short we reckoned the skirts should be allowed to get, while trying to strike a delicate balance between personal liberties and raging hormones.

About 15-20 minutes into the discussion, arguments both for and against shorter skirts had been batted around without any clear consensus. Just when it seemed that we were not going to be able to agree on just how much farther above the knee the skirts should be allowed to drift, Ricky just couldn’t hold back any longer and rose to speak to the issue. “If we let the mini-skirts get any shorter”, he said, “that’ll be like sloppin’ the hogs, and then telling ’em not to eat!”

Well, after a short pause to let his argument sink in, there was a brief outburst of spontaneous laughter that changed the atmosphere of the discussion altogether, as you might imagine. We weren’t so much laughing at Ricky as at the quaint, powerful, and humorous country metaphor he had come up with to get his point across. I don’t remember what we recommended to the administration, but I’ll never forget the wisdom that was wrapped up in such a simple, but effective, illustration that only an Arkansas farm boy could have come up with.

Blind Trust Or Treasures In Heaven?

Sometimes we cross paths with strangers whose kindness is so extraordinary that it leaves us asking, “Who does that?” This is a true story of just such an encounter that I still find to be mind-boggling every time think about it.

At the time, I was a graduate student, and we were headed to London, Ontario, where I would conduct a research project during the summer that would be helpful to my career development. Because it was not far out of our way, we decided this would be a great opportunity to camp for a week in the Adirondack Mountains, before moving on to London.

Unfortunately, there was a hurricane making its way North that, although considerably weakened by the time it got to New York, still was packing strong winds and lots of cold rain. For some reason, we were not aware that we were camping through a hurricane until after the fact, but we were very much aware that we and our camping gear were cold, damp and wet, and that we were fed up with being confined to our small tent for most of a week just trying to stay as warm and dry as possible.

Now, here comes the good part. An older couple “camping” comfortably next to us in a large, dry and warm camper had befriended us during the week, offering to have us spend some time with them to get warm and dry. But, alas and alack, when it came time for us to pack up and leave, we were neither warm nor dry. They picked up on our suffering, and, having pity on us, made us a most amazing offer. These total strangers would lend us the keys to their house – which was right on our way to London – so that we could spend the night there and get us and our camping gear dry, warm and clean for the final leg of our journey the next day! They even invited us to eat their food and help ourselves to their strawberry patch, which was in peak production at the time. We could hardly believe our ears; who does that? We knew that they could trust us with their stuff, but they didn’t. Such a thing can only come from generous hearts that are extraordinarily trusting and compassionate. They watched us suffer through the wind, rain and cold for a week, and then stepped up and did what they could do to help us out. Of course, we couldn’t refuse their offer and were richly blessed by their act of kindness.

I still can’t fully wrap my mind around it, though. What motivated them to make such a kind and generous offer? Were they so fully detached from their earthly belongings that they really didn’t care if we ripped them off? Or, perhaps, were they such good judges of character that they had a way of knowing that we would not rip them off? I don’t know. But, this one thing I do know: this precious couple humbly lived out, if even for only this one encounter, the heart and spirit of what Jesus was saying in Matthew 6:19-21. They surely made a sizable deposit into their heavenly treasury that day, I can tell you! 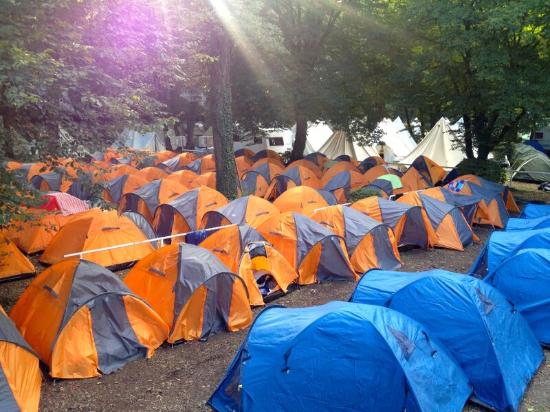 The (Other) Lion That Roared

Funny things often happen when you are vacationing, but they don’t always seem very funny at the time. This funny thing happened when we were passing through Germany while touring Europe in 1972. We were driving our brand-new White/Red Volkswagen Vanagon and going from campground to campground to save money. A two-person tent served as our bedroom.

We pulled into Munich after sunset and followed the road signs to a large campground. After paying the camping fee, we drove to our camping spot and began to set up our tent. That turned out to be no small task, as the tents were crowded so close together that there was not space enough to place the tent stakes properly (see photo). In fact, it was so tight that at one corner of our tent there was no choice but to connect directly to one of our neighbor’s stakes! Having secured the tent, we retired to our sleeping bags right away, so as to get an early start at sight-seeing the next day.

We slept relatively undisturbed until daybreak, when something very unexpected and troubling happened. We woke up to what sounded distinctly like the roaring of very hungry African lions nearby! So, we took a moment to share our thoughts on the matter: “How can that possibly be? We are in Munich, for goodness sake. How can there even be lions anywhere near here? But, just in case, maybe we should get out of our tent and climb into the Vanagon for protection.” So, out of the tent we scrambled and took a quick look around before seeking refuge. And that’s when we saw it: a very large, …… unlit sign just above the treeline that read “MUNICH ZOO.” Now that explained a lot, to our great relief and embarrassment.

After another quick look around to see if we were, perchance, the only ones expecting to be attacked by roaring lions at any time now, we had a good laugh at ourselves. Then we proceeded to break camp and move on as if nothing scary had happened. And, in actuality, it hadn’t!

By the way, Munich was very nice, as expected. Apparently, all of the hungry lions were still in the zoo!

The Cat and the Commode

(Warning: This story is hilarious, but it contains a potentially offensive word picture. Read at your own risk!)

I love house cats, especially when they are tiny kittens…innocent, curious and eager to explore new things. They just do the darndest things! This story took place when we were living in a small country house near Ithaca, NY. We had gotten a couple of kittens, Missy and Muffet, just a few days earlier. As it turns out, baby animals are fascinated with water, and some seem to be drawn to it, especially the tinkling sound produced by falling water. Missy was no exception, as I was about to find out. Now, keep in mind that what I am about to tell you occurred rapidly in real time, much faster than you can read about it.

We had a lavatory just off of one corner of the kitchen. One afternoon I felt the need to relieve myself and “make my bladder gladder”, if you catch my drift. So, into the lavatory I went and began to take care of business. Almost immediately I noticed, out of the corner of my right eye, a small, fuzzy animal trotting in through the open door to see what was going on. It was my little Missy, come to investigate the tinkling sound. Immediately I got the feeling that this may not end well for her.

She stopped and sat down about a foot away from the commode and peered inquisitively toward the source of the tinkling sound. I thought that was really cute of her. But, then she began to go into that nervous little crouch that cats do when preparing to pounce. I said to myself, “Surely she’s not going to actually try to jump up onto the edge of the toilet bowl to get a better view of the falling “water.” But alack and alas, that’s exactly what she had in mind, so up she goes. Problem was, she didn’t yet know that toilet bowls were not solid on top. Another problem was, she didn’t know to compensate for her forward momentum as she tried to land on the edge of the toilet bowl. Next thing I know, she is hopelessly tipping toward where the stream was entering the toilet water, her frantic struggles to gain her balance notwithstanding. So, in she plopped, legs and tail flailing frantically as she tried to stay afloat. By this time I was already beginning to see the humor in this learning experience for Missy. She quickly made her way across to the other side, managed to scramble up onto the other side of the the toilet bowl, dropped down onto the floor, and tried to shake off as much of the “water” as she could. So, I decided to just keep tinkling, because I reckoned she wasn’t injured and surely had learned not to do that again! She would go around behind me to get away and run out the door, right?

But alack and alas, again, that was not the case. I watched her square around toward the commode and, once again, go into that tell-tale crouch. “Surely”, I thought to myself, “she will not jump up there again, after all that!” But upsy-daisy, here she came, and with the exact same result. Now I was laughing so hard it was a struggle to control my stream, but I managed. Then, I quickly grabbed a towel and dried Missy off as best I could. For her part, she just casually walked away, as if nothing out of the ordinary had just happened.

I’m not convinced that Missy really learned anything from that episode, but I sure did: next time, close that darned door!