Salvation: It’s More About God Than Us!

I almost entitled this article “Its All About God”, because, in a sense, it is. Salvation is how God transforms us from creations that dishonor and scandalize Him into new creations that praise and glorify Him. But, I relented, because I didn’t want to minimize the mind-boggling magnitude of God’s love for us, which was amply demonstrated when Christ died in our place (Romans 5:8). Hence, “salvation is more about God than us” better captures the fullness of what I hope to get across in this article.

I would venture to guess that most born-again Christians have gotten the impression that salvation is all about us. After all, God so loved us (John 3:16), Christ died for us (Romans 5:8) and salvation is a free gift to us (Romans 5:15-16). And, if the only reason that God saved us was to keep us out of hell and bless us forever, then salvation would be all about us. But, there’s more to it than that, much more. So, I’ll get right to the point.

The Westminster Shorter Catechism (1647) states that “Man’s chief end is to glorify God, and to enjoy him for ever.” In an earlier article, I presented a biblical basis for these conclusions (click HERE). The first of these two conclusions tells us God’s primary motive in creating us; that is, to glorify Himself. The second conclusion “…to enjoy him for ever”, describes what God intended for us to get out of our new relationship with Him; namely, to enjoy Him forever in heaven, which is eternal life. But, when sin entered the world, death followed, and mankind no longer glorified God and ceased to enjoy Him at all, much less forever. And, that’s where salvation came in. God had a plan to restore mankind to the original, created condition, so that mankind would, once again, glorify God and enjoy Him forever.

So, exactly how is our salvation more about God than it is about ourselves? Let’s start with salvation belongs to God (Psalm 3:8; Revelation 7:10 and 19:1), and go from there. When His only begotten Son, Jesus Christ, was born, the angels ascribed glory to God (Luke 2:14). This Jesus is the author and the finisher of our faith (Hebrews 12:2), through which we are saved (Ephesians 2:8). Moreover, we love God because He first loved us (1 John 4:19). And, it is God who chose us for salvation, not the other way around (click HERE).  We are reminded repeatedly in the New Testament that our victories in Christ are for the glory of God. In fact, a quick search of the New Testament (MEV) produced at least 50 verses that speak of various ways that mankind gives glory to God. Even our confession that “Jesus Christ is Lord” is to the glory of God the Father (Philippians 2:11). Salvation is about the glory of God first and foremost, from the beginning covenant given to Eve in the Garden of Eden (Genesis 3:15), right through to the New Covenant, sealed in the blood of Jesus (1 Corinthians 11:25). God is the giver here, while we are the recipients, and it is the giver to whom all the glory for our salvation belongs, because God will not share His glory with others (Isaiah 42:8; 48:11). Without such a great salvation, we would have remained without God and without hope in the world (Ephesians 2:12)! It was God’s ingenious plan of salvation that paved the way for mankind to, once again, glorify God. As a result, mankind is enabled to enjoy Him forever, which, by the way, is also to the glory of God (Romans 15:7)!

That said, please don’t get the idea that I am discounting the role that God’s love for us played in motivating Him to save us; I am not. God demonstrates His own love toward us, in that while we were yet sinners, Christ died for us (Romans 5:8)! And, God so loved the world that He gave His only begotten Son, that whoever believes in Him will not perish, but have everlasting life (John 3:16). For sure, we are eternally grateful for God’s great love toward us! But, in contemplating the gift of salvation, we often tend to forget that God created us to glorify Himself in ways that no other being that He created on the earth is able to, because only we can really know Him and love Him back (click HERE). That, I believe, was His ultimate purpose in creating mankind in the first place: to reflect His glory back to Him, just as Jesus does (Hebrews 1:3 with 2 Corinthians 3:18). And now, thanks to God, we are willing and able to do that!

(To read more of my articles with biblical themes, click HERE)

The Reverse of the Curse

God has been impressing on me lately the incredible magnitutide of what He has already done to bridge the spiritual gap between Himself and mankind that began when Adam chose to obey Satan instead of God in the Garden of Eden (Genesis 3). God’s response to that “original sin” was three-fold: 1) He pronounced curses on Adam, Eve, Satan and all of creation; 2) He drove Adam and Eve from the Garden so that they could no longer eat of the tree of life and live forever; and 3) He severed the spiritual connection into which He had created Adam and Eve in the first place. The latter is the spiritual gap that original sin caused, and I want to focus here on the extent to which God has already bridged that gap, how incredibly far God has gone to more than restore our former spiritual connection with Him. To do that, I will focus on God’s presence as manifested by the Holy Spirit.

So, in the fullness of time, God sent His only begotten Son, Jesus Christ, to spiritually reconnect (i.e., reconcile) mankind with Himself. But God went much farther than merely re-establishing the former spiritual connection. At Jesus’ request, God sent the Holy Spirit to actually dwell within each person who would receive Him as their Lord and Savior, thus fulfilling the prophecy of Ezekiel 36:27! Never before had the spiritual connection between God and His saints been either this intimate or this powerful, although God was within the Old Testament prophets when they prophesied (1 Peter 1:10-11). Now, all who believe in Jesus have within them the same power that raised Jesus from the dead (Romans 8:11)! Moreover, the fact that God would place the Holy Spirit within each new believer is proof positive that He has, in fact, made us to be “the righteousness of God in Christ (Romans 3:22).” Otherwise, we would not be morally fit for co-habitation by the Holy Spirit (Psalm 5:4)!

Now, let’s pause for a moment to summarize: God was with Adam and Eve in the Garden of Eden; God was with the Isrealites in the wilderness as they followed Him around for 40 years; God dwelled among the Israelites in temples built in the Promised Land for His presence; God was momentarily within at least one prophet when he was prophesying (Ezekiel 2:2); when Jesus came, God dwelled among men for 33 years and the spiritual connection with the Father was re-instated; but, when the Father sent the Holy Spirit to believers, for the first time ever God dwelled within men permanently. “Why is that such a big deal?”, you may ask. Its primarily because the Holy Spirit within us is a God-given guarantee that we will, for sure, always have eternal life (Ephesians 1:14)! Our salvation has been sealed by the Holy Spirit within us (Ephesians 1:13).

At the beginning of this article, I pointed out that God’s response to Adam’s “original sin” was three-fold, and, so far, I have dwelt on only the third response. But the Bible tells us that God will re-create the kind of utopian scenario that existed in the Garden of Eden before sin entered the world, and that we will be together with God once more on a renewed earth, where we will reign with Jesus forever. In the meantime, let’s remember that God has already done more than merely remedy our spiritual separation from Himself: His Spirit now dwells within us! God sure knows how to more than “reverse the curse”, doesn’t He? 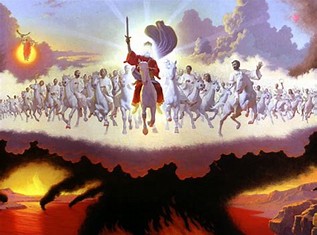